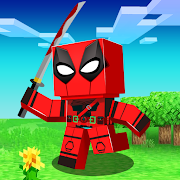 Android 4.4 and up Craft Smashers io – Imposter multicraft battle
Cube craft smasher io ️⛳
Have you ever wished to smash all the crafts into thousand of cubes? Surviving without building anything but smash ’em?
This free game is absolutely for you! ️🏹
Cube craft Smasher io – the fascinating combination of smasher io and cube craft context in only one battle arena. Exploring endless funny moments in unlimited sessions by using your crafting weapons like a hammer to smash others mobs and don’t get hit. To become stronger, use your crafts smartly to squish others into blocks, absorb their power, get a much more dangerous saw and be the last survival smasher !

⚡ HOW TO PLAY ⚡
– Run and smash other cube craft mobs
– Absorb enemies’ power to become bigger, stronger and having better skills
– Try to be the last survival smasher